The Imbewu Trust presents the 2014 Imbewu SCrIBE winner “Four Small Gods” at Magnet Theatre. Written and directed by award-winning theatre maker Joanna Evans, “Four Small Gods” is a comic tragedy about four animals on a boat after the world has flooded. The play was the winning entry for the Imbewu Trust’s 2014 SCrIBE Scriptwriting competition, with the top prize of having the play produced for a professional run in Cape Town.

At the tender age of 25, Evans is already a celebrated theatre maker, including a Standard Bank Silver Ovation Award winner for The Year of the Bicycle, the 2012 Mavis Taylor award for Theatre Making and, most recently, Best International Show at the 2015 Iran International Theatre Festival for Children and Youth. Joanna first presented Four Small Gods while studying Theatre Making at UCT, and has been developing it ever since. Three years later and she has assembled a stellar team of creative minds to present a visual feast.

Four Small Gods is a comic-tragedy about four animals in a boat after the world has flooded. It re-writes the ancient flood myth to examine contemporary relationships between people, animals and land and to deconstruct hierarchical understandings of worth. The Gods reach into the flood and pull out the last four survivors: a Dog, a Panther, a Rhino and a Human. As they negotiate their survival on a storm-tossed boat barriers between species, as well as barriers of language, are destabilised.
The cast includes Iman Isaacs (City of Violence; Full Stops on Your Face; Nat); multiple award winner Richard September (Rondomsrik; Nat; Warrior on Wheels); Amy Louise Wilson (The Book of Negroes; The Year of the Bicycle; Scrape); and Siya Sikawuti (Richard III; Return of the Ancestors; Othello). Also featuring is young talent Nandipha Tavares Calburn and, making his stage debut, is artist Matthew King.

Four Small Gods will be presented at Magnet Theatre from 30 October to 10 November 2015 at 7.30pm nightly, except Sundays. There is a matinee at 3pm on Saturday 7 November. Tickets cost R90 with R60 for concessions (students and pensioners) and R50 for block bookings for groups of ten or more. Tickets to the preview on Friday 30 October cost R60. Tickets on Mondays are two for the price of one. 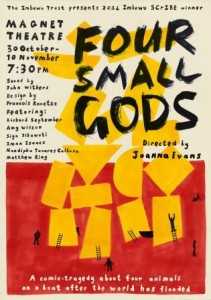 We are open to full capacity for the last 3 Shows of Brecht’s The Good Soul of Szechuan! Go and get your seat now at www.webtickets.co.za/v2/Event.aspx?itemid=1515409160#classof2022 #magnetsgoodsoul #magnettheatretrainees2022 #YouthMonth2022 #brecht ... See MoreSee Less

The Good Soul of Szechuan

The Good Soul of Szechuan by Bertolt Brecht, translated by David Harrower questions the possibility of moral goodness in the face of economic and personal hardship when 3 gods travel to Szechuan to de...
View on Facebook
· Share