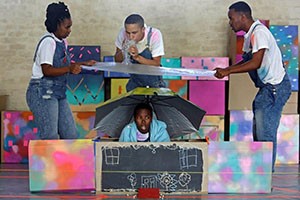 Ekhaya is a brand new production for under 10’s created by The Magnet Early Years Theatre Company and is an expression of the relationship of children towards home. It delves into their understanding of being ‘’at home’’, in various contexts, and explores their associated feelings using age appropriate language, song, and clear imagery. This production has toured throughout Cape Town and the Cederberg municipalities in 2015 and opened Testoni Ragazzi Festival at La Baracca in Bologna in February 2017. Now it has been selected to perform at the CRADLE OF CREATIVITY, an international Festival as part of the ASSITEJ Wolrd Congress being held in South Africa in May this year.

For this project, Magnet Theatre is supported by the National Arts Council Flagship grant.

It’s a wrap! Thank you to all of you out there who keep us in your hearts and minds. We celebrate resilience in another pandemic year. Thank you to all the staff and a sad goodbye to Nomsa Mbothwe and Zukisani Nongogo. Magnet will not be the same without you! Thank you for your passion and experience and for just being the best humans around. We were privileged to have you in our corner for so many years! ... See MoreSee Less